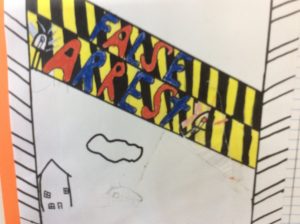 Windie was sleeping at her house at 24 Goof Street. The house she was in was 2 stories big. She was doing school work before she fell asleep.  But then the police woke her up with their sirens as they pulled up in her driveway. The police car is not the newest in the garage and  has a few dents and scratches here and there. The doors opened and 2 policemen got out..

They trudged out of the car and knocked on the door. Windie woke up and went down stairs and opened the door. Suddenly, the police pinned her on the brown wood wall and cuffed her in the kitchen. Windie’s face was pinned . Shocked that this all happened, Windie was sped off in the cop car with the police trying to deny that she was not what they’re looking for.

The road they were taking to the jail was sketchy. There were a lot of homeless people with signs and all the trees looked very very old. Wondering why the  cops weren’t saying a word, Windie was frustrated

When they got to jail the police discovered Windie did not match the description.They had made a mistake.

The government was not impressed at the police and  Windie had to walk home past all of the hippies.

About the Author: Casey